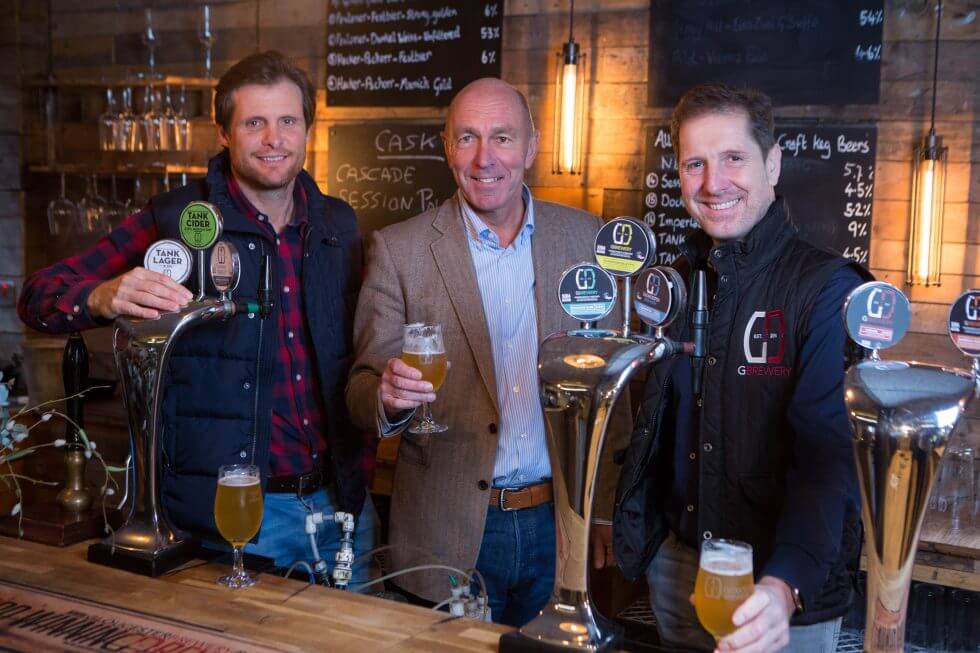 Award-winning brewery at Gloucester Docks plans to launch its own gins and double its pint production by the end of 2020.

Owner and chairman at Gloucester Rugby Martin St. Quinton is one of three new investors on board at Gloucester Brewery as part of its ambitious plans for the future.

Between them, they have taken a 35 per cent share of the business owned by Jared Brown who founded the brewery in 2011.

With the additional investment, new fermenting tanks are on order that will double its brewing capacity from 400,000 pints a year currently to around 800,000 by the end of 2020. Negotiations are underway to open another bar and plans are in place to install a distillery on site to produce branded vodka and a range of gins in the new year.

They have also embarked on a £30,000 refurbishment of Tank bar and doubled its brewery sales force.

Jared said: “This first phase of investment has put us in a fantastic position where we have a healthy cash flow to fund our plans for growth. We are delighted to be working with our three new investors to shape a really exciting future the brewery.

“From the very early days back in 2011 we have always talked about the possibility of getting involved with Gloucester Rugby. To now actually have the owner of the club as a shareholder in the brewery is absolutely fantastic.

“Martin is a great guy who brings a wealth of knowledge and experience to the table and it’s an absolute honour to have him involved.”

Martin, who is also chairman of Cheltenham Racecourse, said: “I decided to get involved with Gloucester Brewery because I love supporting local businesses and young entrepreneurs who are trying to develop ideas and create something interesting. Gloucester Brewery ticked both of those boxes.

“Jared has got plans for new beers, increasing capacity substantially and introducing a range of new spirits, principally gin, and I am looking forward to seeing these plans develop.”

Simon Thomas, founder and former owner of Thomas Legal Group, and now a business and property investor and Dave Lewins, an experienced businessman from Cheltenham are the other two new investors at Gloucester Brewery.

Simon said: “I’ve always be a fan of supporting small businesses having successfully set up and run my own company here in Gloucester. Having sold that, when my good friend Jared invited me to take a look at the stunning potential of Gloucester Brewery and the exciting plans for it, it wasn’t a difficult decision for me to get involved.

“I jumped at the chance to play a part in this wonderful local business, with its heritage location in an historic wharf building at Gloucester Docks and with the amazing quality of beer it was already producing.

“Dave and Martin soon also realised the potential and joined me on this new journey to make Gloucester Brewery a business that the city of Gloucester can support and be proud of.”

Dave who is now the brewery’s Sales and Marketing Director, said he is delighted to be involved in the brewery’s plans for the future.

“I got involved because after Simon approached me as a fellow beer lover knowing I had relevant management and experience in company growth and knew that I’d be well suited and excited to help in taking a brewery to a new level,” he said.

“He was right.  Simon brought me to meet Jared who showed me around Gloucester Brewery and Tank bar and explained his exciting plans and let me sample the Session IPA which I immediately fell in love with, and I’ve been working steadily through the incredible range of beers ever since.

“We’re working very closely together on a daily basis on the expansion plans and are very much aligned.”

Are you 18 or older? This website requires you to be 18 years of age or older. Please verify your age to view the content, or click "Exit" to leave.
Shop Now